Bacteria are single-celled microorganisms that impact your daily life. Your body has many different kinds of bacteria that perform vital metabolic functions and provide key protection against foreign substances. But, bacteria can also be pathogenic (disease-producing).

Of all living groups, bacteria alone are prokaryotic. Prokaryotic organisms do not have membrane-covered nuclei or cellular organelles. This makes them very unique among the many species on Earth, and being prokaryotic does not mean they are that “simple”. They have a remarkable reproductive capability and metabolic diversity. They survive in deserts, hot springs, glaciers, and seas and in the organisms that live in those environments.

Bacteria were the first living organisms and continue to exist in close relationship to many other species.

To understand the importance of bacteria and bacterial characteristics, you should be able to:

fission—a form of asexual reproduction; the splitting of an organism into two parts.

flagellum—a structure that allows cells to be motile; usually has a core of 9 + 2 array of microtubules.

Gram stain—a type of stain used to identify bacteria as being either Gram positive or Gram negative, depending on the chemical characteristics of the bacterial cell wall.

spirillum—spiral-shaped bacteria belonging to the genus of Gram-negative bacteria.

All organisms must take in energy to survive and perform metabolic and reproductive activities. Bacteria differ in the way they obtain energy.

Bacteria have three basic shapes: spherical, rod-shaped, and spiral-shaped. A bacterium with a spherical shape is a coccus (plural, cocci), one having a rod shape is a bacillus (plural, bacilli), and one with twists is a spirillum (plural, spirilla).

There are a variety of shapes within the three groups. Cocci can be somewhat flattened, bacilli can be tapered at the ends, and spirilla can be comma-shaped or have multiple twists.

Bacteria are unicellular and prokaryotic, meaning that they do not have membrane-covered organelles which separate chemical reactions inside the cell. 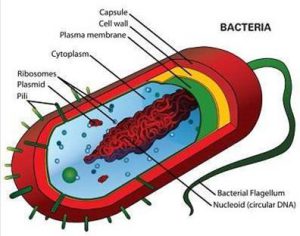 1) capsule—a sticky layer outside the cell wall that allows some bacteria to stick to surfaces such as teeth and mucous membranes. It also helps some bacterial species avoid being engulfed by the body’s infection-fighting cells and helps prevent the bacteria from drying out in some environments.

The capsule can also have a slime layer or biofilm. The slime layer allows the bacteria to stick to materials and each other to form microcolonies within the slime layer. Bacterial biofilms are important considerations in some health conditions. Streptococcus mutans grows a biofilm that can decalcify tooth enamel and leads to infections of the teeth. Pseudomonas aeruginosa biofilms cause chronic lung infections in patients with cystic fibrosis and make the infections much harder to treat.

For example, the image at the right shows Staphylococcus aureus on the surface of an indwelling catheter. The sticky-looking substance between the round-shaped bacteria (cocci) is the bacterial biofilm. The biofilm protects the bacteria and makes the infection more difficult to treat with antibiotics.

2) cell wall—a semi-rigid permeable structure just inside the capsule that surrounds other bacterial structures  and allows the bacteria to keep its shape. It is made up of peptide (protein) groups and polysaccharide (sugars) strands. 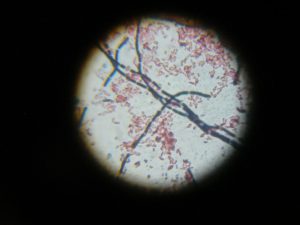 A few bacteria do not have cell walls. They have, instead, chemical compounds which protect the bacteria against drying out and they usually live in environments in which osmotic pressures are not a problem for survival. Mycoplasma pneumoniae is an example of a cell wall-less bacteria. Because it has no cell wall it can have a variety of shapes.

3) flagella—a whip-like structure used for movement. Some, but not all, bacteria have one or more flagella. These structures move in a circular motion to propel the bacteria forward. Bacteria can have multiple flagella that surround the cell, a few flagella on one or both ends of the cell, or a single flagella.

Of medical significance, some bacteria use their flagella to propel themselves into body organs through tubes and ducts. Urinary tract infections can become bladder infections after bacterial flagella propel the bacteria up the urethra into the bladder. Some organisms can be identified by their motility (movement) pattern in cultures.

4) plasma membrane—a membrane  surrounding the cytoplasm just inside the cell wall. The plasma membrane provides support and allows movement into and out of the cell. Its main function is providing the selective permeability that allows metabolic function. It also participates in energy-providing functions, synthesis of membrane lipids, and motility functions.

5) cytoplasm—a gel-like substance inside the plasma membrane, it is the site of metabolic and reproductive processes.

6) ribosomes—site for protein synthesis. These structures are made up of RNA and protein.

8) plasmids—extrachromosomal genetic material; made up of DNA.

5.Draw and label the structures of a typical bacterium.