Many infections and diseases are caused by microorganisms—

organisms that cannot be seen without the aid of a microscope.  But, not all microorganisms cause disease. There are many bacteria in the environment that don’t make you sick.

How do the pathogens—disease-causing agents—produce infection and disease in the body?

To understand how microorganisms cause disease, you should be able to:

bacteria—one-celled, prokaryotic organisms which are involved in fermentation, nitrogen fixation, and infectious disease.

disease—a condition in which the body cannot function normally due to infection by a pathogenic agent, genetic condition, nutritional deficiency, or an illness of an affected body organ.

endotoxin—poisons that are part of the bacterial cell wall that are released when the bacteria adheres to a host cell.

exotoxin—a poison excreted by a microorganism.

infection—a condition in which an infectious agent invades the body and begins to multiply.

inflammation—redness, swelling, pain and tenderness around an area of the body due to an infection or injury.

transmission— any mechanism by which an infectious agent is spread to a host.

virus—an infectious agent that multiplies only within the cells of living hosts; composed of RNA or DNA and a protein coat; more complex viruses also have a surrounding envelope.

Have you ever gone to the doctor for a sinus infection,

the flu, or a bad cold? Depending on your illness, the doctor may have told you the infection was caused by a bacteria or a virus. Have you ever thought about the difference between the two? You may be used to hearing about bacterial or viral infections, but have you ever thought about how these microorganisms— organisms too small to be seen without a microscope—can actually make you sick?

There are plenty of microorganisms that you are in contact with every day that do not make you sick.  Millions of bacteria live in your body and help you digest food, destroy harmful bacteria, and protect you by creating environments in which disease-causing organisms cannot survive. Other microorganisms infect you and cause you to become sick. You may get a fever, have swollen lymph glands, cough a lot, and have a runny nose or high fever.

Why do only some microorganisms make you ill?

How microbes are transmitted

The first step in infection is the microbe entering the body. This can happen in a number of different ways and each is specific to the pathogen. Transmission is the process by which an infectious agent leaves its reservoir or host, travels by some method, and enters and infects a susceptible host.

Knowing how an infectious agent is transmitted allows you to take actions to avoid infection.  For example, if a pathogen is airborne, avoid being in an environment of someone who is coughing without covering his mouth. If the infectious agent is vector-borne, avoid the carriers, such as mosquitoes or fleas by using an insect repellent.

Once inside the body, pathogens (disease-causing organisms) attack specific cells or travel to specific tissues, depending on the pathogen.

Infections and disease are not the same. An infection occurs when bacteria, viruses, or other pathogens invade the body and begin to multiply. This is the first step to a disease condition. Disease occurs when the cells of your body are damaged from the invading pathogens and regular cell processes are disrupted. The disruption of cell processes causes symptoms that are specific to the    pathogen.

This is why you develop a rash from the measles virus (a single stranded RNA virus of Morbillivirus genus) or why your throat hurts so much when you have strep throat (Streptococcus pyogenes).  Each pathogen attacks specific cells that disrupt processes which then produce specific symptoms.

Soon after the initial time of infection, many pathogens are destroyed through natural immune responses by the body. The pathogen may be engulfed (phagocytized) by specialized white blood cells or made inactive by antibodies in the blood.  Inflammation of tissues is triggered by the presence of a pathogen and may keep the infection localized. Keeping the infection contained allows more specific immune responses time to develop and fight the infection.

What happens if it is NOT contained?

If a pathogen invades host body cells, multiplies, and is not contained, it can cause the host cell to burst and release even more pathogens into the body. These then move to susceptible body cells and continue to multiply. Enzymes help some  pathogens invade the cells and help with the spread from the initial site of infection to other areas of the body. Other enzymes kill white blood cells that would have destroyed the pathogen. These processes result in the infection spreading throughout the body causing disease.

Once pathogens are inside body cells, they cause disease by destroying cells and disrupting tissue and body functions. Some bacteria produce exotoxins—a poisonous substance that is released into cells. Examples of bacteria that produce exotoxins include Clostridium botulinum that produces botulism, Corynebacterium diphtheria which produces diphtheria, and Clostridium tetani which produces tetanus. These bacteria can be fought by a variety of immune system factors, but sometimes the exotoxin is so poisonous that it is deadly to the host before the immune system can destroy it.

Other bacteria produce endotoxins—poisons that are part of the bacterial cell well. Unlike exotoxins, endotoxins are not released from the bacteria until the bacteria adhere to the surface of a body cell.  Bacteria that secrete endotoxins include E. coli (severe diarrhea),  Pseudomonas (infections of the lungs, urinary tract, burn, and wounds), Neisseria (meningitis and gonorrhea), and B. pertussis (whooping cough).

Viruses also cause infectious disease. Their structure consists of a protein coat wrapped around a nucleic acid core—its genetic material. They cannot replicate outside a living host cell.

Each type of virus can only reproduce inside certain hosts. For example, some viruses infect only humans, while others infect only dogs. You don’t worry about getting a cold from your dog.

In order to infect a body cell, viruses chemically attach to the host cell. The entire virus or its genetic component penetrates the cell’s cytoplasm. Viral DNA or RNA interferes with host genetic material and redirects the cell to produce copies and form new virus particles. The reproduced viruses are released from the cell, usually when the cell ruptures and is destroyed.

The new virus particles spread to other cells, the process is repeated, and infection and disease result.

Clearly, pathogens are not without their defenses and specialized ways of managing their spread throughout the body. Their structure may be simple, but they are not simple in their response mechanisms and the consequences to their invasion of the body can be lethal.

Investigates issues relating to bioterrorism, gather data to identify potential risks to public safety, work with policy makers to establish protocols for increased safety and develop plans for quick response to bioterrorist attacks.
Education    Most jobs require Ph.D., but some may require only a Master’s degree.
Average Salary    $75,000 but varies with employer, location, qualification, and experience
Job Outlook   Improving

Mumps in the NHL 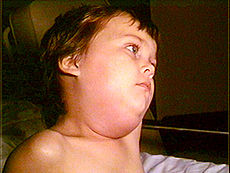 Late 2014, National Hockey League players from at least 5 different teams got the mumps. All hockey players had been vaccinated which probably accounted for their mild symptoms. Vaccines are not 100% effective in all people, but will lessen the severity and often the duration of disease if a person does contract it. Image: A child with the typical swollen salivary glands of the mumps disease.  http://en.wikipedia.org/wiki/Mumps