The overall pattern shown by disease case data when plotted in an epi-curve indicates the possible source of an infection. Knowing the source of the outbreak allows epidemiologists and public health officials to recommend prevention and control measures more quickly. This reduces patient cases and often saves lives.

Objectives
By the time you finish this lesson, you should be able to:

epidemic— numbers of disease cases, injuries, or other health conditions greater than expected in an area or population during a particular period.

epi-curve— a graph that plots the course of an outbreak by time of onset.

histogram— a graph using bars or columns to represent values in a statistical study; in epidemiology, time is usually plotted on the x-axis with number of cases on the y-axis.

incubation period— the time period from exposure to an infectious agent to the onset of symptoms of disease.

index case— the first case of a particular health condition of which health authorities are aware.

outbreak— the sudden rise in the occurrence of a disease or injury in a given area during a given time period; generally considered to be more localized than an epidemic.

transmission—any method by which an infectious agent is spread to a host.

An epi-curve pattern looks different depending on the source of infection and how the disease is transmitted.

Read the different kinds of source outbreaks below and carefully analyze the each example outbreak epi-curve. You will see that by analyzing when the cases have occurred, you can narrow the possibilities for how the outbreak started. 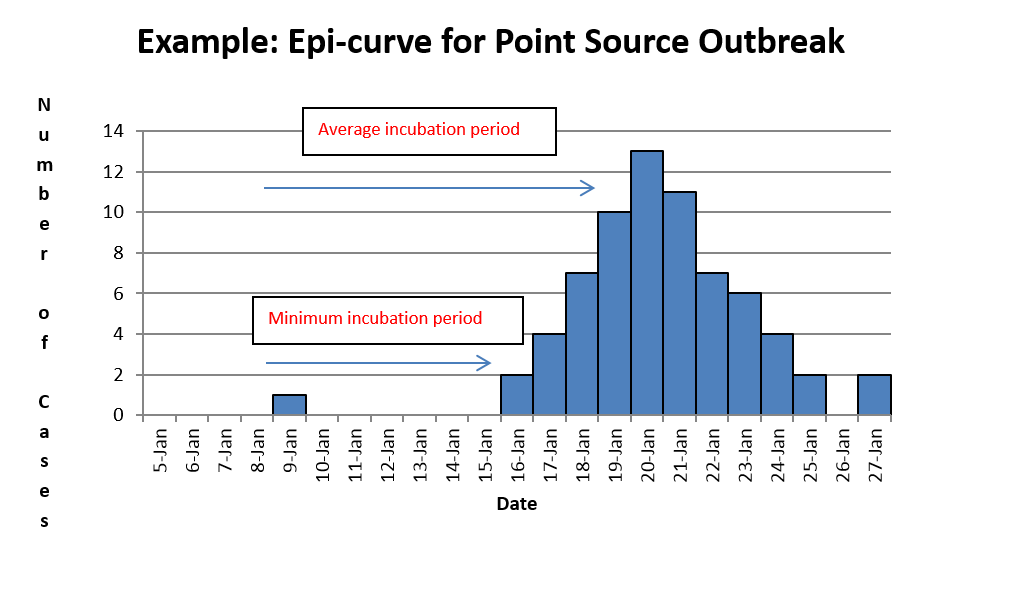 This type of outbreak happens if a large number of people are exposed to a pathogen and the source persists. The epi-curve below indicates that a larger number of people were exposed simultaneously and that the source of the infection was not identified or eliminated quickly; more people became ill. No cases usually occur after the cause of the exposure is eliminated in this type of outbreak.

Looking at the epi-curve below, when would you say the exposure ends? 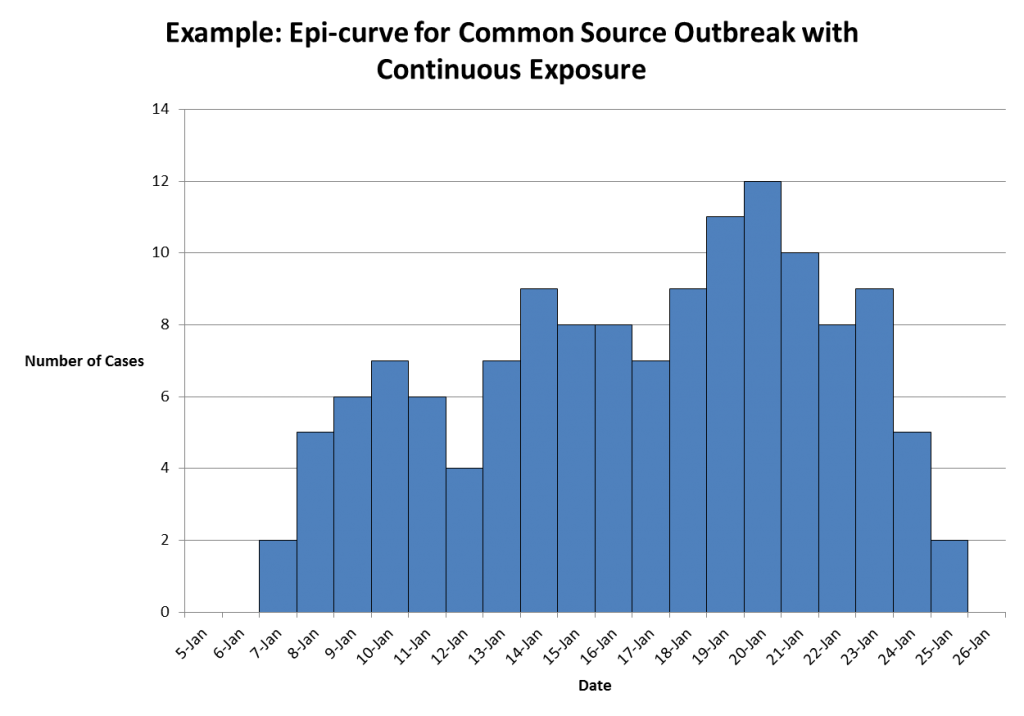 Why would this not be a person-to-person transmission? 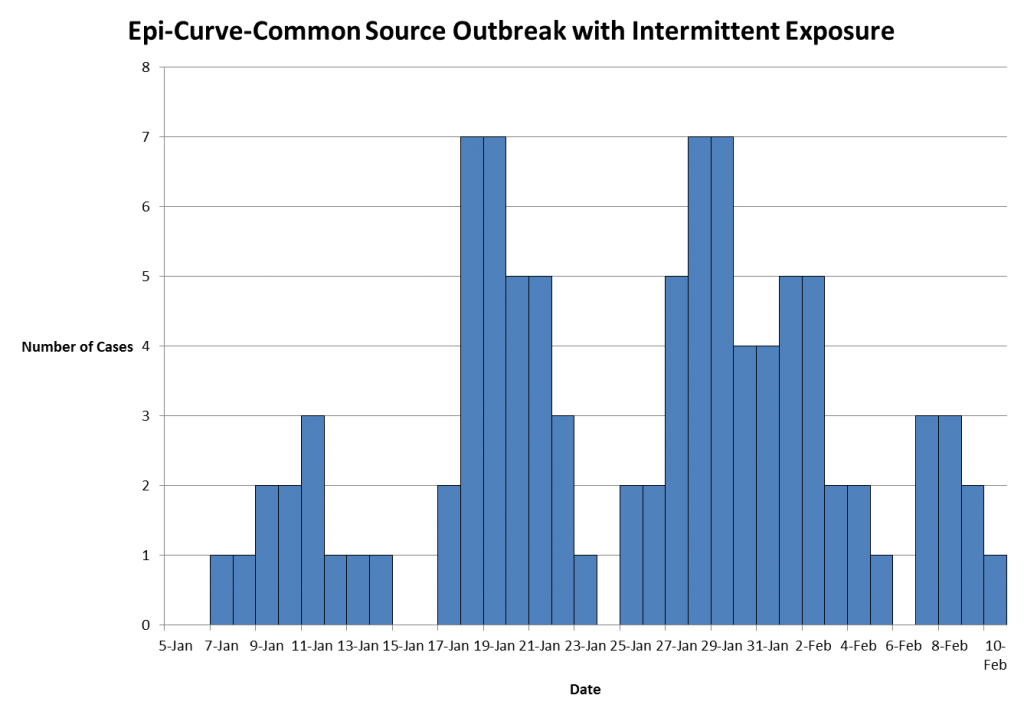 In contrast to common source outbreaks, person-to-person outbreaks have as many sources as there are people who spread disease.

Index case with limited spread outbreaks occur when an “index case”, sometimes called Patient Zero, infects people who in turn infect more people. The outbreak continues during a limited time frame until there are no more susceptible people to infect or until successful control measures such as isolation or quarantine halts transmission.

The outbreak ends when infected people no longer transmit the disease to other people due to lack of susceptible people or effective control measures. 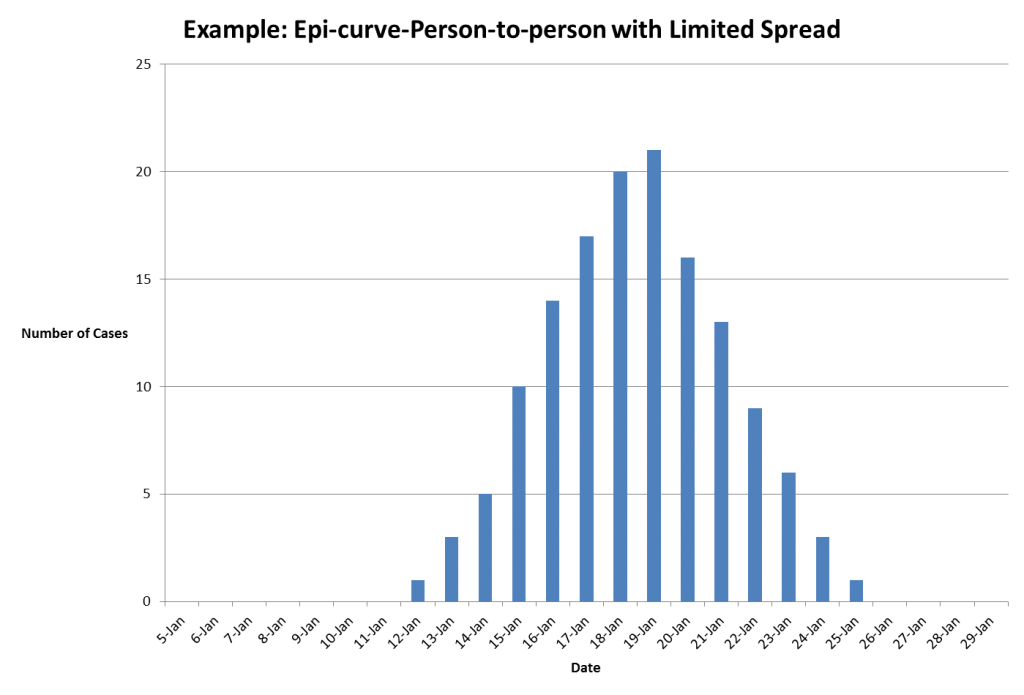 Propagated spread—This type of outbreak occurs when the outbreak results from an index case but then develops into a much larger (propagated) epidemic. Successively large numbers of cases occur, initially separated by incubation periods.  Numbers of cases begin to merge with increasing cases until the number of susceptible individuals decreases or until control measures are effective. 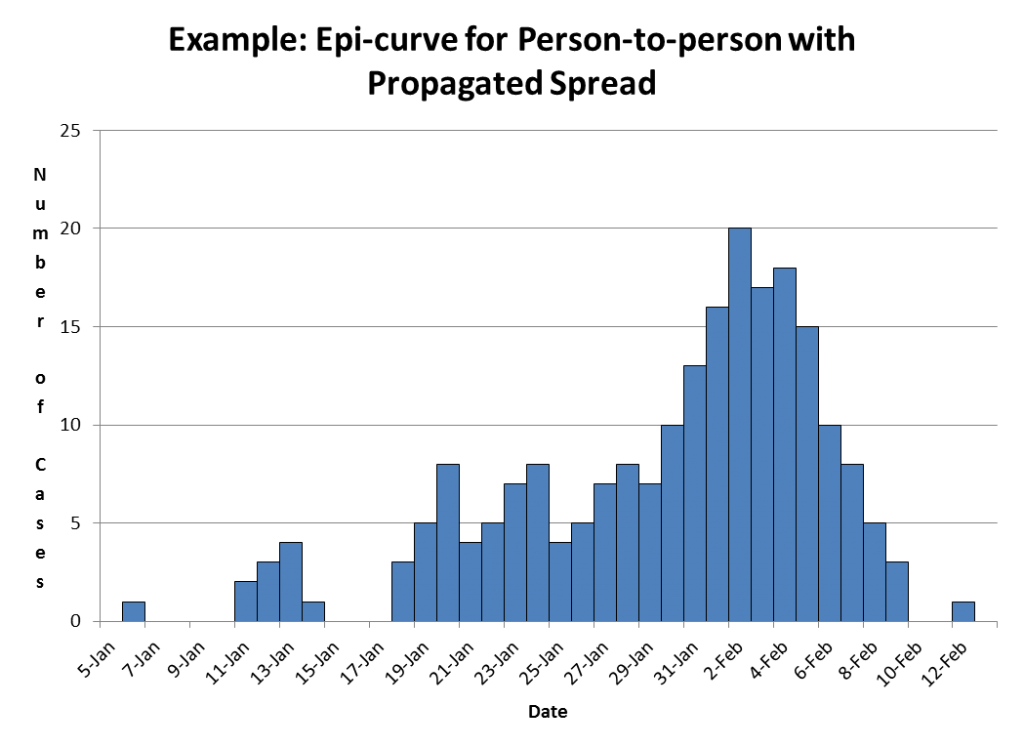 NOTE: The shape of an outbreak’s epi-curve rarely fits any one type of outbreak perfectly. Epidemiologists must analyze multiple sources of information in order to quickly and accurately pinpoint the source of infection. 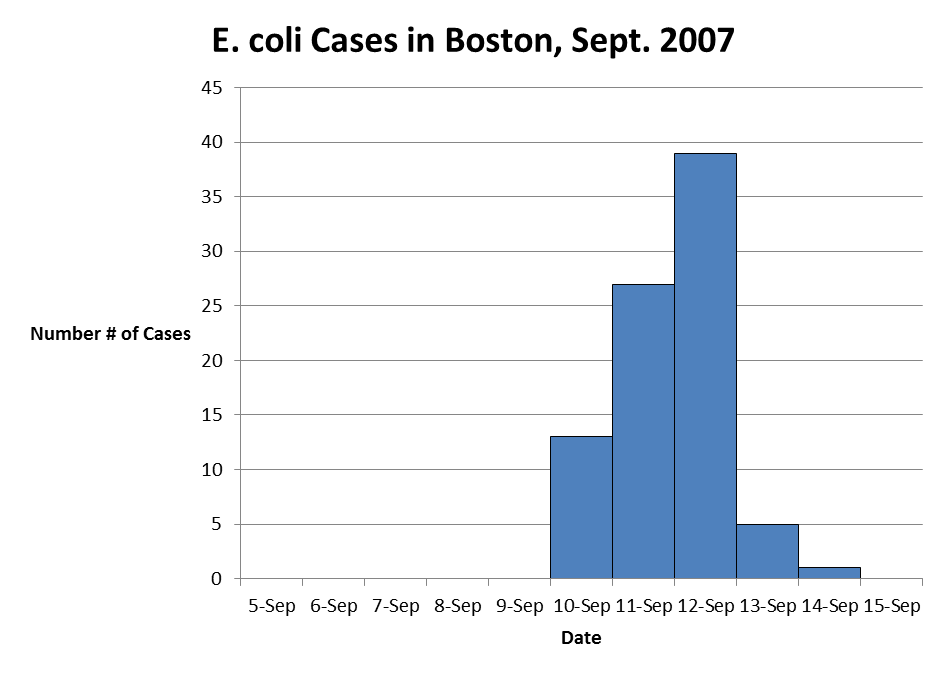 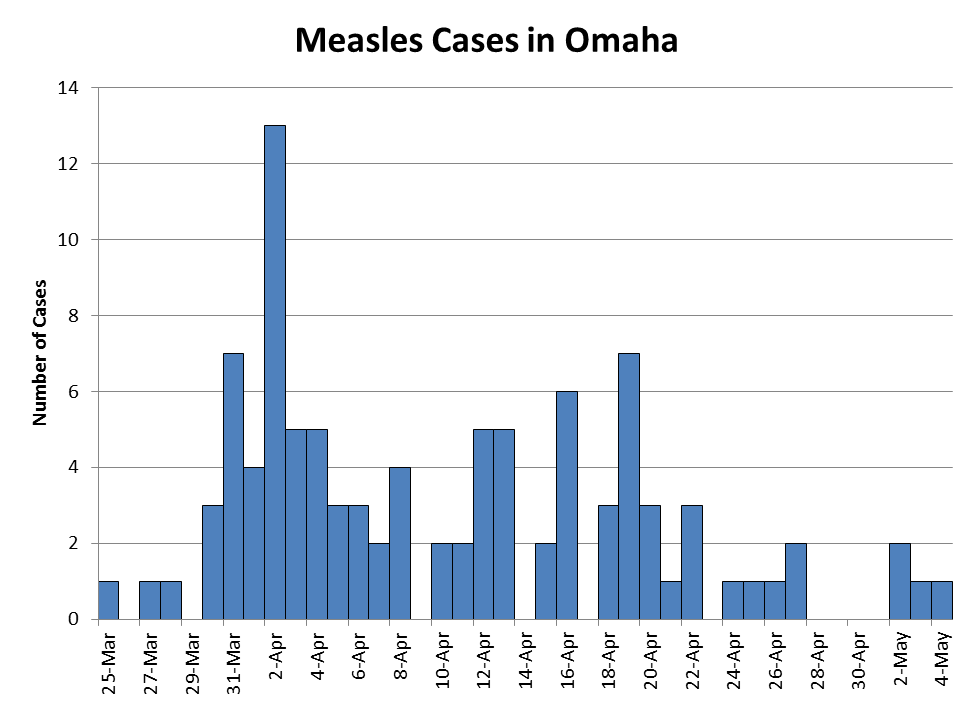 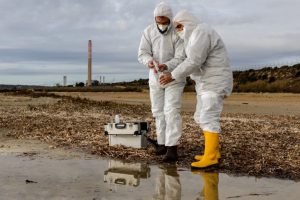 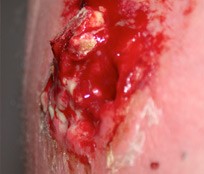 MRSA, Methicillin-resistant Staphylococcus aureus, is a bacterium that is difficult to treat because of its resistance to antibiotics that could kill it. It can cause severe infections and can spread to others easily. Image:Ruptured MRSA abscess.http://commons.wikimedia.org/wiki/File:Mrsa_cyst_exploded.jpg