Students investigate why they should get a new flu vaccine every year when a brother complains about having to get a flu shot. He maintains he does not need a new flu shot because he had one last year and he does not get new vaccinations all the time. His mother is adamant—she also wants to protect Grandma and Grandpa from getting sick.  Who’s right?

To better understand immunity and immunizations, students should be able to: 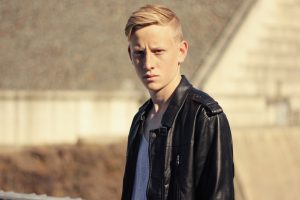 You hear your brother whining to your Mom and roll your eyes.  He wants to act so tough with his friends, but he is really such a baby sometimes.  Maybe you’ll mention his whining in front of his friends the next time he ticks you off.  He won’t like that!

“The flu season is supposed to be bad this year,” says your Mom. “They are predicting a particularly bad flu that can spread quickly.  I don’t want you kids getting so sick!  And what about Grandma and Grandpa? You know it’s much more serious for them if they get sick! You might pass it along to them!”

“I won’t pass anything along to them.  You made me get the flu shot last year, so I’m ok for this year. I don’t get shots every stupid year!” Your brother is really getting worked up now.

“I don’t think it works that way.  Some vaccines need more than one to work. Tetanus, for example.  You had to get more than one tetanus shot, remember? And why would the health department recommend that everyone get a shot if last year’s shot was still good?”

“Because they just want to make money, that’s why!” your brother sulks.

Now, you start to laugh at him. You can’t help it, and you know he’s going to get even madder if he sees you, but it’s not like you care about that.

“You both are going to the doctor for your sports physicals today. Now is a good time to ask the doctor about it,” your mom says.

You remember getting the flu shot last year. So many people were sick in your school and in your brother’s school that they closed schools in the county for a week to try to reduce the number of people getting sick. They suggested that people avoid large crowds and don’t go to the mall or the movies so that the flu didn’t spread as much. You also remember that they had recommended everyone get a flu shot.

You also remember being really glad you didn’t get that flu last year! Some of your friends still weren’t back to school even after schools opened back up! Your best friend, Katie, got the flu shot and still got the stomach flu.  She was pretty sick with it!

But your brother has a point.  Why should you have to get another one if you already got one? You only get one vaccine for measles and for other diseases.

Maybe your mom has this all wrong.

Be able to explain your findings and your decision about who is right about this family argument.

Specialized cells in our immune systems form antibodies in response to pathogen antigens that fight off disease. Pathogens are disease-causing organisms; an antigen is any type of molecular structure that lymphocytes (white blood cells) recognize as foreign to the body and that can trigger an immune response.

Antibodies are chemicals made by B lymphocytes that can bind to antigens. In this way, antibodies inactivate antigens and the person is protected against the disease.

Vaccines take advantage of the body’s natural abilities to fight disease. Just as the body produces antibodies that react to invading microorganisms, vaccines are designed to boost the immune system’s ability to quickly recognize microbes and destroy them before the disease process begins.

A vaccine is an antigen-containing substance (specific to a disease) that stimulates the production of antibodies by the immune system. Most vaccines contain killed or weakened versions of a specific microbe or parts of a microbe. They cannot cause disease, but still produce an immune response. When the dead or weakened microbes are introduced to the body through vaccination, the body responds by destroying the microbe and also by producing a “memory” of the microbe in the immune response system. If the body is later exposed to the disease microbe, the immune system responds much more quickly to eliminate it because it has already formed antibodies.

In vaccine-induced immunity, your body produces antibodies in response to a vaccine; you don’t have to get sick.

There are three types of flu viruses—A, B, and C. Types A and B cause the yearly flu epidemics with more severe symptoms than type C.

Of type A and B, type A causes much more large-spread epidemics and symptoms are usually more severe than type B flus. Type B flu viruses can still cause severe symptoms.

Flu viruses mutate over time. The new strain may produce more severe symptoms in humans than the previous strain.

For adults, immunity to tetanus from getting a tetanus vaccine usually lasts 10 years.

You are not protected against this year’s flu even if you got a flu vaccine last year. There are different flu strains circulating in the environment due to mutations which occur in the virus. Because the strains are different, the body does not recognize the new strain and has no antibodies against it. Each year the flu virus is different, so you need a new vaccine to protect against it.

Each virus, vaccine, and the body’s responses to the vaccines are different. Adults do not need to be immunized against polio or diphtheria if they were immunized as children as they most likely have produced last immunity.

However, adults who have an increased risk of exposure to the polio virus should consider having a booster dose of the polio vaccine.

Viruses undergo two types of changes. Generally, both are due to the fact that viral RNA replication is error-prone. As a result, the mutation frequency in, for example, the influenza virus, is greater than in other replication processes—much greater than in DNA replication. The majority of these mutations will be “silent”, but others will produce amino acid substitutions which may result in a new variant of the virus.

Antigenic drift are small changes in both type A and B influenza viruses that occur continually over time. These changes, however small, can result in a virus that is not recognized by the body’s immune system. A person who has been infected with a flu virus strain develops antibodies against that strain.  If the virus changes, the antibodies produced in response to the original virus no longer recognize the pathogen and do not fight the disease. The person is infected with the new viral strain and again gets the flu. This can happen year-to-year, so even if a person gets a flu vaccine one year, it won’t work on the next year’s strain.

Each year, the multiple strains in the influenza vaccine are updated to reflect the strains that appear to be the most likely strains for that year. It is important to get a vaccine for the new type of virus.

There is no vaccine to protect against the flu virus that causes gastroenteritis, the stomach flu. The influenza virus causes a respiratory infection; Gastroenteritis is caused by a variety of viruses, including rotaviruses and noroviruses.

► Invite your county or district public health officer or an epidemiologist from a local university (or both) to talk to your classes about how public health is monitored in your area.

► Invite a public health officer to discuss the importance of immunization in the prevention of disease. You may suggest that they discuss the 2017-2018 influenza epidemic and how immunization or the lack of it affected the disease spread and severity.

►Have your students watch the optional video “The Vaccine That Changed The World”. The video details the development of the polio vaccine. The students are probably not familiar with the “polio season”—the time of year when polio cases increased, peaked, and then, for some reason, went away. For decades, parents were fearful of their children contracting this disease which could leave their child paralyzed, crippled, or in an iron lung—if they survived.

The video details how the vaccine was developed, the incredible work done by the Jonas Salk research team in a basement lab in Pittsburgh, Pennsylvania, and the courageous Americans who banded together to donate money for the research effort and who volunteered their children to test the vaccine in hopes that they would be protected from the disease.

The Student Study Guide for the video is at:
http://www.pandemsim.com/pdc/index.php/video-the-vaccine-that-changed-the-world

The Teacher Guide for this video is located in the Teacher Pages.

Additional resources about viruses, vaccines, and immunization can be found:

in the Not Another Flu Shot! background materials at
http://www.pandemsim.com/pdc/index.php/not-another-flu-shot/

in the Internet Resources for Vaccines at
http://www.pandemsim.com/pdc/index.php/internet-resources-vaccines-2/ 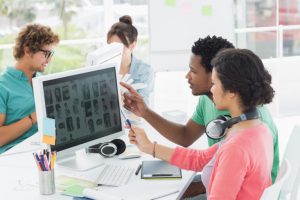 Job Description: Uses computer software and sketches to develop layouts used in advertisements, brochures, websites, and reports. Meets with clients to determine needs and preferences and creates designs. Education: Bachelor’s degree in graphic design Average Salary: $46,900 Job Outlook: Fair; job opportunities are not expected to increase and in some industries, they are expected to decline. 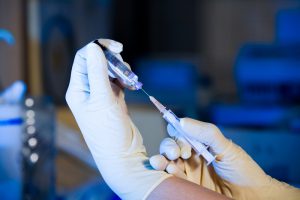 Flu viral strains change from year to year. Scientists research which strains are most likely to be circulating in the population each year and produce a vaccine to protect against the most prevalent strains. The flu shot you get is a different one each year.