You already know that bacteria and viruses cause disease. But you may not be so familiar with the protozoans, a group within the protist group. This group of organisms is extremely important when considering the potential to cause disease.

Protozoans cause millions of cases of illness and deaths each year. Billions of dollars are spent trying to prevent infection by these unicellular organisms. They are not bacteria and they are not viruses.  Exactly what are pathogenic protozoans?

To understand the importance of protozoans and their role in causing infectious disease, you should be able to:

cilia—short, hair-like structures by which some microorganisms move.

ciliate—a protozoan that moves by cilia.

flagella—long, hair-like structures by which some microorganisms move.

parasite—an organism that lives on or in another organism (the host) for at least part of its life cycle.

protozoan—a group of protists, including the sarcodines, ciliates, sporozoans, and flagellates.

sporozoan—a protozoan that usually has no method of movement and is a parasite.

zooflagellates—a protozoan that moves by one or more flagella.

Most protists are single-celled, eukaryotic organisms. (Remember that eukaryotic organisms have membrane-bound organelles, such as mitochondria, endoplasmic reticulum, Golgi bodies, DNA in chromatin, and microtubules that form a cytoskeleton.)  A few protists, such as the brown algae are multi-cellular organisms, but are still considered protists because they are more closely related to the unicellular protists than to members of any other group.  Those multi-cellular algae, however, are not pathogenic (disease-causing).

The protists make up such a hugely diverse group that scientists have reclassified its members several times. This lesson focuses on the pathogenic protists, most of which belong to a group informally called the “animal-like protists”—the protozoans. Some biologists prefer a different classification, but the term still remains in common usage.

Protozoans (proto or “first”, zoa “animals”) are classified according to how they move:

Unlike bacteria which are prokaryotic, all protozoans are eukaryotic organisms. Protozoans also exhibit great diversity, displaying a wide variety of shapes and sizes, life cycles, and types of organelles.

Most pathogens found in the Kingdom Protista are protozoans.

1) Zooflagellates—Zooflagellates are single-celled organisms that move by using one or more flagella. Flagella are long, hair-like structures used for movement. They do not have cells walls. Examples of zooflagellates that are pathogens are:

►Giardia lamblia—Giardia is a protozoan that infects the small intestine where it adheres to the intestinal wall by means of sucking discs. The parasite produces cysts as it moves through the digestive tract and large amounts can be passed out when feces are eliminated. Cysts can live for several weeks outside the body and can be passed to another individual. Symptoms of Giardia infection include abdominal pain, diarrhea, headache, loss of appetite, nausea, nd weight loss.

A person is infected with Giardia by drinking contaminated water, eating raw or undercooked contaminated food, and having contact with surfaces that have been exposed to animal or human wastes.

►Leishmania sp.—This parasitic protozoan is spread by the bite of sand flies. Symptoms depend on the type of leishmania organism.

Cutaneous leishmania and visceral leishmania infections are caused by more than 20 different leishmania species. The cutaneous form is most common.

►Trichomonas hominis—This protozoan parasite causes a common sexually transmitted disease. It is estimated that 3.7 million people are infected with Trichomonas, but only about 30% have symptoms. The parasite is transmitted during sex. People without symptoms can still pass the infection to other people.

Infected men and women have different symptoms. The infection does not usually cause symptoms in men, but can still be spread to another person. Men may have burning after urination, itching of urethra, and discharges from the urethra. Symptoms in women include vaginal itching, foamy greenish-yellow vaginal discharge, and vulvar itching.

2) Sarcodines—Sarcodines are single-celled organisms that move by using extensions of the cytoplasm called pseudopods. This type of locomotion is called ameboid movement. Sarcodines ingest food by engulfing particles and creating a food vacuole for digestion. This group of protozoans reproduces by splitting in two (binary fission). Pathogenic amoebas include:

►Entamoeba histolytica—E. histolytica is an amoeboid protozoan that completes its life cycle inside human intestines. Cysts become active and motile and multiply rapidly once inside a human host. The organisms release enzymes which destroy cells in the intestine and rectum. The disease, amoebic dysentery, causes painful cramping and diarrhea.

Amoebic dysentery is common in tropical regions with contaminated water supplies and poor sanitation. It is a leading cause of death among infants and toddlers in some areas of the world.

brain, and other body organs.

In some entamoebic infections, the parasite can affect tissues outside the intestinal tract. The photo at the left shows a patient with an extraintestinal amebic infection.

3) Ciliates—The only member of the ciliate group known to cause disease in humans is Balantidium coli. This intestinal parasite is transmitted through a fecal-oral route when fecal material with Balantidium coli parasites make it into the mouth due to lack of proper hand-washing or washing of contaminated fruits and vegetables.  The cysts then travel to the intestines.

Symptoms of this infection are diarrhea, abdominal pain, and occasionally a perforated colon.

4) Sporozoans—Sporozoans are non-motile. These organisms form spores that enter cells of other organisms and live as parasites. They complete part of their life cycle inside specific cells of host organisms and they have specialized structures that allow them to penetrate host cells.

Examples of pathogenic sporozoans are:

► Plasmodium sp. causes malaria. An estimated 627, 000 people died of malaria in 2012 according to the World Health Organization.

Symptoms appear about 10 days to 4 weeks after infection, but can appear as long as a year after infection and include fever, chills, convulsion, headache, muscle pain, nausea, sweating, vomiting, coma, and bloody  stools. Symptoms occur in cycles of 48 to 72 hours.

►Toxoplasma sp. can produce a flu-like disease, including symptoms such as headache, fever, muscle pain and sore throats. Hosts for this parasite include domestic and wild animals (especially cats) and humans. Human infection occurs when people handle cat litter, eat raw or undercooked meat, or when they eat contaminated soil. The disease is dangerous to immune compromised people and to embryos of pregnant women. It can cause miscarriages or birth defects if the parasite infects the unborn child.

Symptoms in people with a weakened immune system can include confusion, headache, fever, and seizures. 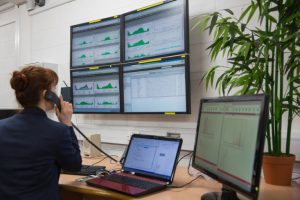 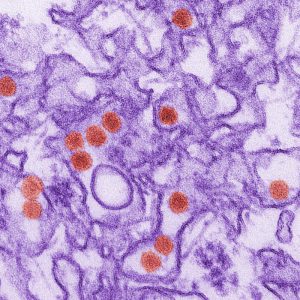 The Zika virus is spread through the bite of a mosquito. Symptoms are fever, rash joint pain, and conjunctivitis (inflammation of the eyes). The virus can be harmful to babies developing in the mother and have devastating consequences.Image: Transmission electron microscopic images of the Zika virus (red spherical particles.) Credit: CDC/Cynthia Goldsmith. https://phil.cdc.gov/phil/details.asp