This 41:32 minute Discovery Channel documentary describes outbreaks of an emerging disease and the team of scientists who travel around the world to investigate the transmission of the Nipah virus. Students see how the steps of epidemiological investigations play out in the real world, find out how teams of scientists work through problems, and understand the worldwide efforts that solve disease outbreaks.

Because we are more globally connected now and disease can get around the world quickly before it can be contained.

He is in Bangladesh, studying the Nipah virus. It has a 70% mortality rate.

The virus was first found in bats and jumped to human infections. Then, it was found out that the virus could be transmitted from human to human and that is an even worse situation.

A super spreader is a person who contracts the disease and then spreads it to many people. The super spreader in the Nipah outbreak in Bangladesh was a revered religious leader in the village. Everyone came to see him when he got sick and took care of him.  They all got the infection.

Because officials killed millions of pigs to keep the virus contained.

Dr. Epstein and his team go out at night and set up nets to catch bats; they are looking for bats with live Nipah virus. The bats have a large range, but somehow, the virus keeps spilling over to humans in this village.  Dr. Epstein wants to find out why it is occurring in this village and not in the nearby village. He catches bats, tests the bats’ saliva and urine for live Nipah virus, paints their toenails red so he knows not to catch them again, and releases them.

The SARS outbreak started in China and was later tracked to a large open wildlife food market. A professor fleeing the outbreak in China took an airplane to Hong Kong and stopped at a hotel. Twenty percent of the passengers on the plane were infected and many more were infected in Hong Kong. In just days, over 400 people were infected and 43 had died. Efforts by the World Health Organization, the U.S. Centers for Disease Control and Prevention (CDC) stopped the outbreak before it reached pandemic proportions, but not before it appeared in several other countries, including Canada.

Both the villagers and the bats like date palm tree sap and many local farmers earned extra money by harvesting data palm juice. They attached clay pots to trees, cut into the trees, and let the sap from the trees flow into the pot. People drink the fresh sap.

Bats also like to drink the sap and farmers would often see the bats in their trees. The bats drink directly from the pots and contaminate the sap with Nipah virus in their saliva. People then drink the Nipah-contaminated sap and become infected.

If this were true, more infections would occur in the fall and winter when the sap runs and harvesting occurs. This was the case which was confirmed when the scientists took infrared images at night showing bats drinking from the pots.

He is concerned because this new strain has the potential for even more devastating effects than the Nipah virus. Fifty percent of people infected with the new strain have died. Bangladesh’s population is so dense and highly populated that the killing disease could spread quickly.

Villagers made mats out of native materials to keep the bats from eating from the pots.

Job Description: Develop applications for computers, phone and other electronic devices and work on systems that run the applications. Work with customers to determine needs and build the functionality to meet the needs. Education: At least a Bachelor’s degree; some positions require a master’s degree. Average Salary:  $98,260 Job Outlook: Good, and expected to grow faster than average for other occupations. 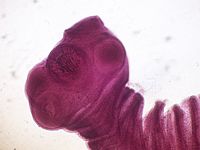 Bacteria and viruses are not the only organisms which cause infectious disease. Parasitic flatworms feed on blood and tissues of a host. Tapeworms live inside the intestines of their hosts by latching onto the intestinal wall with hooks and/or suckers. Image: The scolex (head) of Taenia solium, pork tapeworm. http://en.wikipedia.org/wiki/Taenia_solium