This 44:30 minute BBC documentary details the development of the polio vaccine. Much of the story behind the development of this vaccine and the pressing need for it during the 1930s, 1940s, and 1950s may be unfamiliar to your students. They may have heard of polio as a disease that infected people years ago, but they probably don’t know how devastating its effects were to thousands of children.

The video describes the “polio season”—the time of year when polio cases increased, peaked, and then, for some reason, went away. But, the season came back every year for decades. Parents were fearful of their children contracting this disease which could leave their child paralyzed, crippled, or in an iron lung—if they survived.

The video details the how the vaccine was developed, the incredible work done by the Jonas Salk research team in a basement lab in Pittsburgh, Pennsylvania, and the courageous Americans who banded together to donate money for the research effort and who volunteered their children to test the vaccine in hopes that they would be protected from the disease.

Scientific research is highlighted as is the real world of competing scientists. Footage from the 1950s adds a valuable context to the documentary detailing “the vaccine that changed the world.”

Note: Polio still exists in the world. Cases have decreased 99% since 1988 from 350,000 cases to 37 in 2016 (WHO). Global efforts have resulted in the dramatic reduction. Only 3 countries now report polio virus transmission:  Pakistan, Afghanistan, and Nigeria.

This was the “polio season”. Cases began to appear in late May each year and increased throughout June and July; cases peaked in August. The disease mainly affected children under 5 years old. No one knew why it happened or why it would strike in one city and not in a nearby city. They only knew that every year, more children would come down with this insidious disease which may paralyze or kill them.

Infantile paralysis. It was called that because it most often infected small children and it often ended in varying degrees of paralysis.

Ideas included that polio was spread by cats, by fleas, by organ grinders’ monkeys, by bananas from South America and by public pools. There was no scientific evidence for these ideas but people were desperately trying to avoid anything that might make their children sick.

The polio virus is spread through sneezing, coughing, and contact with human wastes infected with the virus.

Sometimes, the infection came and went with no lasting effects.  Sometimes the disease paralyzed people. This aspect that was particularly bad if the paralysis affected breathing mechanisms. If the diaphragm was affected, a child could not breathe and had to be put in an iron lung.

An iron lung was an early respirator. It inflated and deflated the lungs of people whose diaphragms did not work because of polio infection.

He founded what later became the March of Dimes organization in 1938 whose goal was developing a polio vaccine and helping those who had been infected. The organization raised millions for research and patient help.

At that time, leading scientists thought that vaccines had to contain live virus in order to be effective. Jonas Salk thought that immunity to polio could be produced by a vaccine containing dead virus.

He was a virologist from Cincinnati who was also working on a polio vaccine. He thought the vaccine had to be made from live virus in order to be effective. He was a leading scientist at that time and many other scientists listened to his opinion rather than Dr. Salk’s opinion on the issue. They did not support Dr. Salk’s research.

They produce individual protection against a disease (immunity) and they can produce herd immunity. Herd immunity results when enough of a population has been immunized so that an outbreak is stopped before it becomes an epidemic. If there aren’t enough susceptible people in a population, the virus cannot spread. This type of immunity protects people who cannot be immunized because they are too young or because they have health factors which do not allow them to get vaccinated.

b) Why did they have the test administered by a group outside the University of Pittsburgh (where Salk was located)?

They wanted an environment that would guarantee objectivity.  Although Salk’s researchers would follow science methodology and remain objective, the scientific community and people funding the clinical trial wanted to ensure that objectivity.

c) Why was the clinical trial placebo-controlled?

The vaccine was successful in producing immunity in 80-90% of people tested. 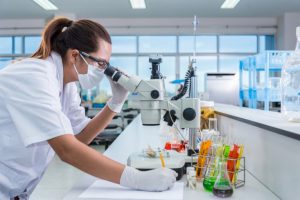 Plans and conducts experiments to test the effectiveness of new medicines, therapies, treatments, and medical devices. They design tests according to scientific methodologies and implements the procedures through strict clinical trials protocols.
Education    Bachelor’s degree and Ph.D in a medical science field.
Average Salary    $76,980 but varies greatly with location, company, and experience
Job Outlook   Good 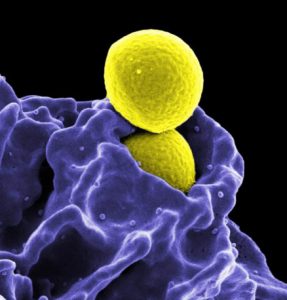 According to a CDC report, Antibiotic Resistance Threat in the United States, 2013, at least 2,049,442 illness and 23,000 deaths have been caused by antibiotic resistance. Image: Methicillin resistant Staphylococcus aureus (round yellow structures) being engulfed by a white blood cell. Content and Photo Credit: NIAID