The human body has several different lines of defense against infections and disease. The immune system is made up of different cells, tissues, and organs working together to fight infection.

By the time you finish this lesson, you should be able to:

antibody—chemicals made by B lymphocytes that can bind to antigens.

antigen—any type of molecular structure that lymphocytes recognize as foreign to the body and that can trigger an immune response.

B cells—a lymphocyte that produces antibodies that bind to an antigen.

effector cell—a cell that actively engages a pathogen to engulf and destroy it.

helper T cell—a lymphocyte that stimulates mitotic divisions that result in the production of increased numbers of T cells after contact with an antigen.

immunological memory—the characteristic of the immune response that involves lymphocytes’ abilities to recognize an antigen in the future that it encountered in a previous immune response.

immunological specificity—the characteristic of the immune response that involves lymphocytes’ ability to engage with a particular type of antigen.

macrophage—a large cell that engulfs cells foreign to the body.

memory cell—a cell that recognizes a pathogen from previous contact and is capable of destroying it at a later exposure.

self-markers—particular molecular structures on every cell that immune response cells recognize as “self”.

The immune response is basically defined by and can be understood by two key features: specificity and memory.

Each kind of cell, virus, or chemical particle has a unique molecular structure. An individual’s cells have a distinctive structure that other body cells recognize as self-markers. Pathogen-fighting lymphocytes (blood cells) recognize the body’s own “self-markers” and ignore them.  When they encounter foreign agents or particles, however, they begin a series of mitotic divisions which greatly increase the numbers of pathogen-fighting cells.

These new huge populations of cells (effector cells) actively engage pathogens to engulf and destroy them while other cells (memory cells) do not actively engage the pathogens. Memory cells stay in the blood and “remember” the specific pathogenic structure that stimulated their formation. When these cells encounter the same pathogen in the future, they are capable of destroying it and the individual does not get the disease. (Effector cells are T lymphocytes; memory cells are B lymphocytes.)

Any type of molecular structure that can trigger lymphocytes to multiply and destroy foreign particles are called antigens. The antigen is a foreign substance that the lymphocytes recognize as not being “self”.

What happens when an injury allows bacteria to enter your body or when you encounter a disease-causing organism?

bacteria or viruses enter the body

lymphocytes recognize that these complexes are foreign and activate:

5. List four places were pathogens could be found in the body. 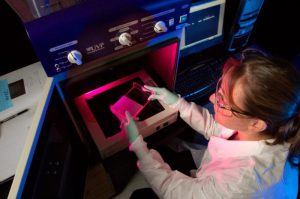 Vaccines and the Immune Response 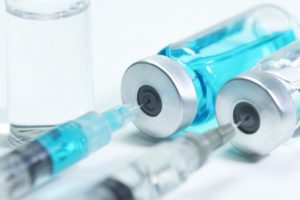 Vaccines protect you against disease by stimulating your immune system to produce antibodies that can fight off and destroy specific pathogens (disease-causing organisms.)