How can such simple structures be so puzzling? Compared to the multi-system complex vertebrates made up of organized cells, tissues, and organs, viruses and prions appear, at first glance, to be extremely simple particles. But, appearances are deceiving.

With seemingly very little to work with, viruses and prions cause debilitating conditions and countless deaths from diseases that cannot be cured and that science struggles to control. How can viral and prion disease effects be so destructive?

To understand the importance of viruses and prions, you should be able to:

capsid—the protein shell of a virus which encloses the genetic material.

coronavirus—group of viruses named for the crown-like spikes on the surface of the enveloping protein coat; cause upper respiratory tract illnesses.

hemagglutinin (HA)—a protein on the surface of an influenza virus responsible for viral attachment to specific receptors on host cells.

host—an organism on which another organism lives.

neuraminidase (NA)—a protein on the surface of an influenza virus that allows the virus to be released from the host cell.

prion—small proteins that are altered gene products that cause degenerative diseases of the nervous system.

Viruses are made up of a protein coat, or capsid, which encloses either DNA or RNA, the genetic code for the virus. Some viruses also have a membrane (made up of lipids) that covers the capsid, but not all viruses have this membrane.

Other features of some viruses make them very well adapted for causing disease. The features are not additional components; they are part of the protein coat or viral genetic material. For example, the protein coat consists of one or more types of protein subunits arranged in various shapes, depending on the virus type. Some viral coats have spikes and tails. Spikes and tails help the virus bind to receptor sites on host body cells.

Once inside the body, viruses are able to infect cells and cause disease. Viruses multiply slightly differently according to type, but almost all cycle through the same five steps:

1) Attachment:  The virus attaches to a host cell. Any cell will do as long as the virus can chemically attach to specific molecular groups on the cell surface.

2) Penetration: The entire virus or just its genetic material penetrates the cell and enters the cell’s cytoplasm.

3) Replication and Synthesis: The viral DNA or RNA uses the host cell to produce thousands of copies of viral nucleic acids and proteins.

5) Release: New viral particles are released from the cell, the cell dies, and the new particles go on to infect other healthy host cells.

These five basic steps take place in all viral replication, but different viruses accomplish them in slightly different ways.  Some viruses enter the host nucleus and use the cell’s structures to replicate, but stay separate from the cell’s genetic material. Adenovirus is an example of a DNA virus that replicates in this way; influenza is an example of an RNA virus that also uses the cell’s structures to make RNA copies of itself but stays separate from the host cell’s genome.

Retroviruses replicate in a slightly different way. They are RNA viruses but the RNA is converted into DNA by a viral enzyme, reverse transcriptase. Once the RNA has been converted into the double-stranded DNA, it can become part of the host cell’s (DNA-based) genome. The virus goes on to replicate using the cell’s structures.

Human Immunodeficiency Virus (HIV), the common cold, and some forms of cancer are retroviruses. Most retroviruses are associated with causing lifelong infections.

Now, consider the bacteriophages—a group of viruses that infect bacterial cells. Much of what we know about viruses come from our study of bacteriophages. Bacterial cells can be cultured easily and quickly in a laboratory and are used in initial testing of viral characteristics.

Bacteriophages replicate using the same basic steps as outlined above, but can also have slightly different pathways.

The lytic pathway for bacteriophages is the rapid replication that ends with lysis of the host cell.  Some bacteriophages also have a lysogenic pathway. In this pathway, viral nucleic acids integrate into the host chromosome and may stay inactivated through many host cell divisions. This produces a latent period that extends over many replication cycles.

Viruses are efficient pathogens.  You are probably already familiar with many of the diseases viruses cause and have probably been immunized against quite a few. Measles, mumps, chickenpox, and influenza are all viral diseases. Each viral disease has a characteristic transmission method and vectors (if any) and produces characteristic symptoms.  Many viral diseases have deadly consequences; three examples are briefly described here. More information about viral diseases that may be emerging or re-emerging diseases can be found in the Table: Global Emerging Diseases on the Pandem Disease Center site.

Ebola, a deadly hemorrhagic disease, is a viral disease that was in the news for months during a recent outbreak in Africa.  American healthcare workers were infected with the Ebola virus and were brought back to the U.S. to receive extensive medical care. In another case, a visitor to the U.S. from west Africa brought the Ebola virus into Texas and infected healthcare workers here.

The disease is transmitted through contact with infected body fluids. Many people were infected through cultural burial traditions that involved contact with family members who died from Ebola. Thousands were infected as the pathogen spread among populations of several countries because proper epidemiological protocols were not followed. Ebola symptoms include fever, headache, weakness, diarrhea, vomiting, and hemorrhaging (uncontrolled bleeding) under the skin, in internal organs, and out body openings such as the mouth, eye, or ears.  Death usually occurs.

Health research institutes are working on vaccines for the hemorrhagic fevers, but there is no cure for viral diseases. But, there are vaccines for some diseases. A vaccine is a solution of dead or weakened disease-causing particles that stimulate the body’s immune system to produce antibodies. The antibodies, specific to the disease, later recognize the pathogen’s antigen and protect the body against the disease.

Millions of people get the flu every year. While some people have mild illness, others have severe complications that can result in hospitalization or death.

There are three types of influenza viruses: A, B, and C. Influenza types A and B cause human seasonal flu outbreaks almost every year. Influenza type C viruses cause only mild respiratory illness and do not cause widespread outbreaks or epidemics.

Influenza Type A viruses have two surface proteins, hemagglutinin (HA) and neuraminidase (NA). Both are embedded in the lipid membrane of the viral envelope. Hemagglutinin is responsible for the attachment of the virus to specific receptors on a host cell surface and also facilitates the fusion of the viral envelope and the cell membrane. In this way, the virus can transfer its genetic material into the host cell. Neuraminidase is a protein on the viral surface that allows the virus to be released from the host cell after replication.

Influenza B viruses do not have HA and NA subtypes but are broken down into lineages. Examples are the B/Yamagata and the B/Victoria.

Influenzas are named by a naming system accepted by the World Health Organization (and followed by the U.S. CDC) that takes into account multiple identification characteristics such as host of origin, geographic origin, strain, and year. Influenza A’s are commonly referred to by their HA and NA numbers, such as H3N2 or H7N9.

Each year, a vaccine is produced after careful scrutiny and prediction of the influenza strains that may infect populations that year. The best way to prevent getting influenza is to get a flu vaccine.

HIV is a contagious disease caused by a single-stranded RNA retrovirus. HIV attacks and gradually destroys the body’s immune system. It is considered a pandemic disease by the World Health Organization (WHO) and has killed over 25 million people worldwide. The number of people infected each year continues to increase.

The virus is spread person-to-person through sexual contact, blood (predominantly from needle-sharing), and from mother-to-child during pregnancy or through breast milk. Infections by contaminated transfusions and blood products have been almost eliminated in developed countries by screening and testing that occurs before blood use.

A person may have no symptoms for up to 10 years after being infected with HIV. He/she is, however, able to transmit the virus to another person. Some people have flu-like symptoms during this initial period after infection, but those symptoms pass.

After this initial phase, the person enters a stage called clinical latency during which there are no symptoms. HIV reproduces, but at very low levels. If he/she has tested positive for HIV and has started anti-viral therapy (AVT), he may be able to keep the viral load (a measurement of the amount of a virus in the bloodstream), at low enough levels to not develop symptoms for up to 10 years. The patient is still able to infect other people with this disease.

HIV is a death sentence. It can be treated to delay death, but it cannot be cured.

Note: Even though high profile viral diseases make the news, it doesn’t mean that viruses are more deadly than bacteria, prions, or any other type of pathogen. Each pathogen has specific characteristics; virulence depends on the specific pathogen

Whether or not viruses are living has been questioned for decades. They have genetic material, they reproduce copies, and they evolve through natural selection. These are all characteristics of living organisms. However, they lack cell structure and they cannot reproduce outside a host cell. These two are also characteristics that scientists use to define life.

Even though viruses have a seemingly simple structure, they come in a variety of shapes and can be quite distinctive in appearance. For example, the coronaviruses appear to have a halo surrounding the protein coat. They are helical and large for an RNA virus. The corona-like appearance results from protein spikes on the surface of the virus.

Now let’s consider a pathogen even simpler than a virus. Prions consist only of protein, yet are the cause of fatal diseases. A prion protein has multiple folding patterns and is capable of causing abnormal folding of normal proteins found mostly in the brain. The abnormal folding leads to brain damage, neuron loss, and neurodegenerative disorders. All prion diseases are fatal.

Most people had never heard much about prion diseases until “mad cow disease” made the news several years ago. As cows in the United Kingdom were found to be sickened with the disease, the U.S. cut off purchasing beef from the U.K. as a precaution. The disease can be transmitted to people when they eat beef contaminated with the prion.

Examples of prion diseases include:

Since prions are neurodegenerative diseases, infected people experience muscular coordination problems, personality changes, impaired memory and thinking, and vision problems. They may eventually lose the ability to speak or move; coma can occur, leading to death. 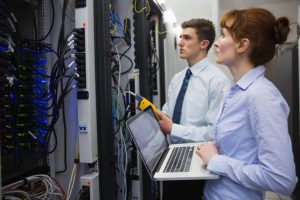 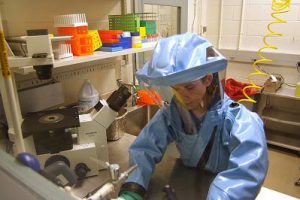 The CDC has four Biosafety Levels which describe the precautions required when working around dangerous biological agents. Each level has specific training for personnel, procedures for storage, and environments for clinical, diagnostic, teaching, and research facilities. Image:A technician wears a biosafety level 4 pressure suit. http://en.wikipedia.org/wiki/Positive_pressure_personnel_suit